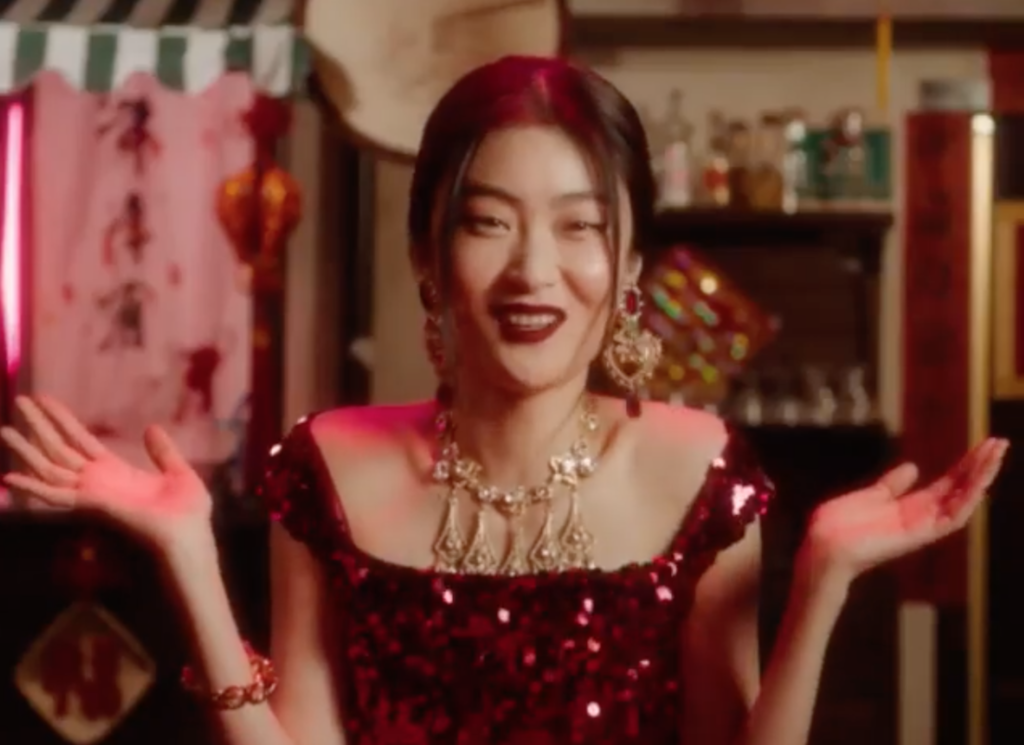 Not shy of being an absolute moron, Stefano Gabbana has once again made a fool of himself and his brand. In an attempt to secure the lucrative Chinese luxury market, the house made a targeted advertising campaign called ‘DG Loves China’ that aimed to pay tribute to (read: trivialise) China’s flipping amazing culture.

The campaign was released over the weekend, on social media platform Weibo, to promote the house’s Shanghai runway show, which was destined to happen today. Immediately, the audience labelled it stereotypical, racist and misogynistic. Dolce & Gabbana deleted the post from Weibo within 24 hours, but it still exists on Instagram.

Since then, a D&G boycott has been trending on Weibo and Diet Prada have come through with MAJOR receipts, including outrageous screenshots of the official D&G account telling someone to “eat dogs bitch” and Stefano calling China a “country of shit”. As a result, agents had pulled their models and talent out of the show and audience, and eventually Dolce & Gabbana cancelled the show — that is after the entire world cancelled them. 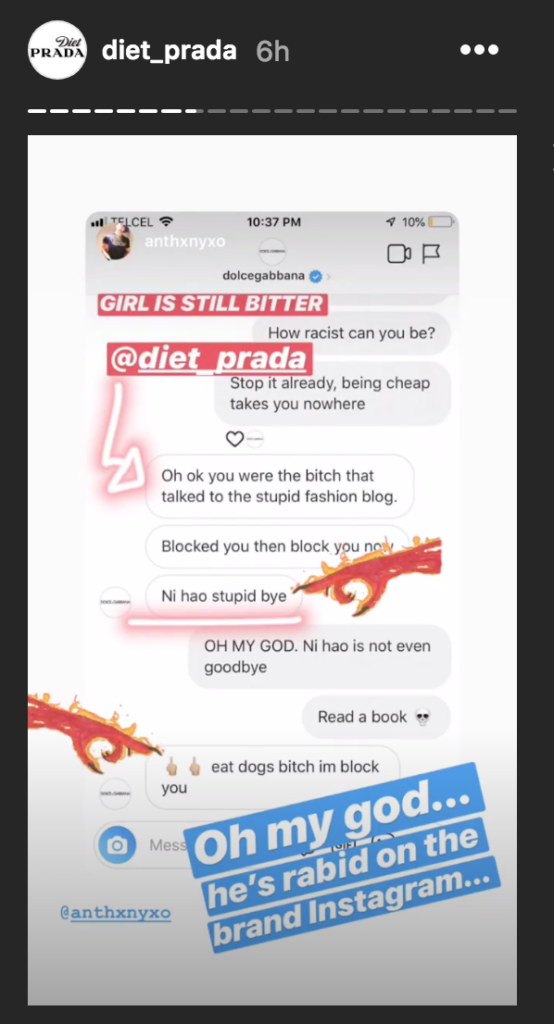 As @dolcegabbana prepares to mount their next runway show in Shanghai this coming evening (7:30PM) and the rest of Instagram fawns over what’s sure to be an overly lavish “love letter” to China, we’ll be wondering if we’ll see chopsticks as hair ornaments, take-out boxes as purses, or even kimonos misappropriated as Chinese costume. Time will tell. For now, we’ll let y’all simmer on this DM between Stefano and Dieter @michaelatranova (chronology is reversed in slides). Word has it that they’re still in the process of model casting (over 200 Asian girls scheduled)...wouldn’t let them walk the show if we were their agents lol. Also, curious what the Chinese government will think of their country being called shit basically...especially considering how strict they are on who to allow to enter the country on work visas based on a thorough social media background checks. • #DGTheGreatShow #DGlovesChina #runway #fashionshow #cancelled #racism #dolceandgabbana #altamoda #rtw #dgmillennials #stefanogabbana #shanghai #chinese #china #wtf #dumb #lame #asianmodel #asian #dietprada

You saw it here first! What an interesting few hours spent wreaking havoc on @dolcegabbana ’s ill-fated #DGTheGreatShow while sitting on our couch juuling and eating gelato (not with chopsticks) lol. Thank you to @michaelatranova @helenatranova @anthxnyxo for sharing their DMs and to all the Chinese Dieters who furiously updated us with translations by the minute. For anyone that believes their account was actually hacked, see slide #2 of Stefano reposting the same DM on his stories before shit hit the fan. Oh the irony of him loving to cry “fake news” and promptly dishing it out himself via his and the brand IG account. Check our story highlight “#DGTheShitShow” for the full recap. • #DGTheGreatShow #DGlovesChina #runway #fashionshow #cancelled #racism #dolceandgabbana #altamoda #rtw #dgmillennials #stefanogabbana #shanghai #chinese #china #wtf #dumb #lame #asianmodel #asian #dietprada