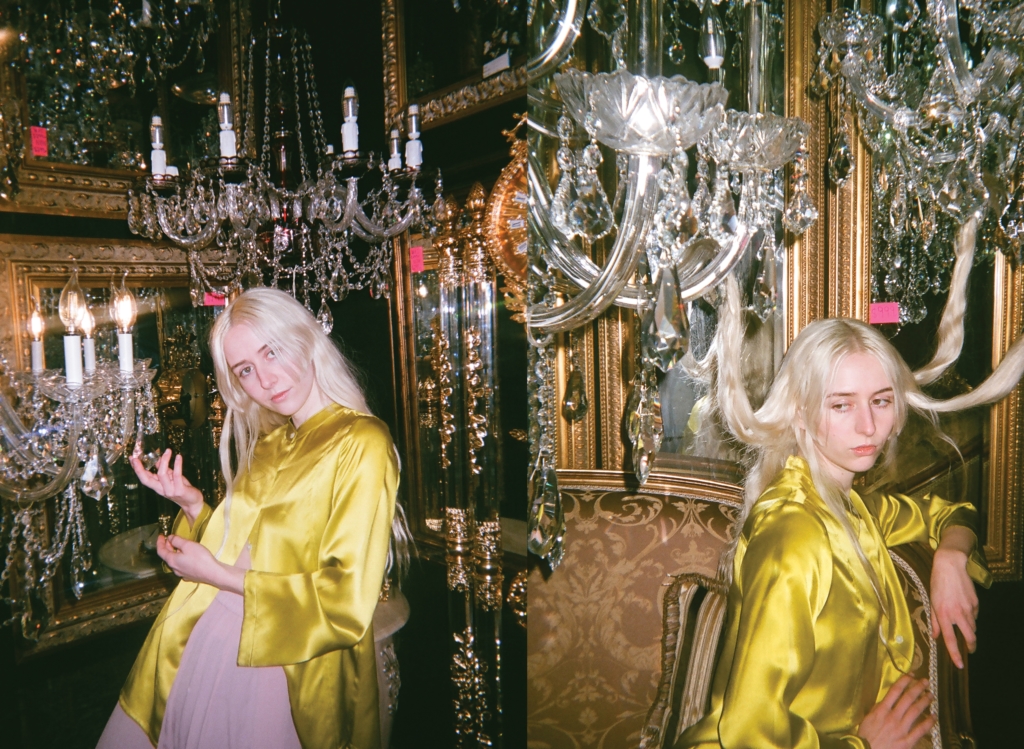 The real deal is one way of describing Maya Laner, but True Blue is the official term. Under that moniker she makes synth pop with softened edges and heights of sensitivity — from a mauve satin-clad closet in the basement of a former funeral home, no less.

In a chance internet meeting, urged by photographer Gabriela Forgo, Maya let me ask her questions about the comfort of secret spaces, her culty education and the bravery required for releasing any kind of art into the world — even if it’s not directly confessional, as she assures me hers is not. In return I get clarity, gratefulness, a clearing up of rumours and a full reflection on feeling misunderstood when it comes to the reportage or rendering of her output and the difficulty of being read right when you’re not forthright with the story.

And then it happens! She describes her music as being “like blind contours of pop songs,” and we come full circle. The disassociation that comes as a result of her closet confines is as glassy and evasive as her music feels. Hard to describe, it just is. It exists, it lives, it feels and is felt back — and then it morphs until it isn’t.

Hayley Morgan: Hey, so first I want to know where your stage name comes from — I’m really hoping it’s a Madonna reference for you…

Maya Laner: It feels like an embodiment of my state of existence as a sensitive and empathic person, which shapes the way that I write and arrange music. To me, the ‘true’ touches on a kind of essential purity or candour, while the ‘blue’ represents a moody, misty haze of feelings. Both words are very emotion-ally evocative, but something about the way that they rhyme and mirror each other visually has a neutralising effect on their emotional charge. The words invoke sincerity, beauty, meaning and feeling but together somehow… mean nothing at all! I also do love that it’s a Madonna reference because she’s an icon that I sometimes turn to for inspiration and power.

Your music is quite chilled out sonically, but it’s intensely emotional… what makes you want to sing about such rich stuff so gently?

It’s not much of an intentional choice to sing gently. There are lots of different ingredients that go into conjuring a feeling into a song and the voice is obviously one of the most evocative tools at your disposal. I usually find that a vocal effect naturally emerges when I’m writing and demoing vocal parts. The feeling I am channelling is infused into the words I choose to sing, the tones of the instrumental accompaniment, and the rhythm and movement of all of the parts. All of these things combined are what makes the vocal effect emerge. It happens very instinctually. I almost always prefer to keep vocal takes from when I first demo the song because they feel the most true to its spirit.

Is your music-making cathartic? Are you doing it to make sense of yourself and life?

I think that most musicians will agree that their music-making is cathartic in some way. It’s essential to my mental health and survival to release and process parts of my psyche. For me, making art is a very valuable and nuanced way to release parts of the psyche. Its potency comes from the self-reflection you get when you physicalise psychic elements in art. This is what leads to an increased sense of self and under-standing of your life, for sure. Some-times what you are releasing is conscious and intentioned and other times it is mysterious and discreet.

Almost two years ago I moved into an apartment that’s very unusual by New York City standards. It used to be a funeral home, so it’s a first floor walk-in with a finished basement. I claimed a small closet in the basement as a space to write and record. The room was pretty austere and uninviting… it was obvious it needed a makeover if I was going to be spending most of my time in there working on music. So I bought some mauve-y satin fabric and put it on the walls. I used to do a similar thing with blankets and other materials to create a vibe in my secret hideouts as a kid. I was obsessed with making secret spaces where I could be completely alone with my thoughts. Thinking about it now, I guess it is related to comfort and making a space that feels like an extension of me. My satin closet studio definitely does allow me to disassociate from space and time… sometimes I go into a trance down there, working on a song for hours without stopping. That’s how my favourite songs have been conceived, because I really feel that I am able to channel something. 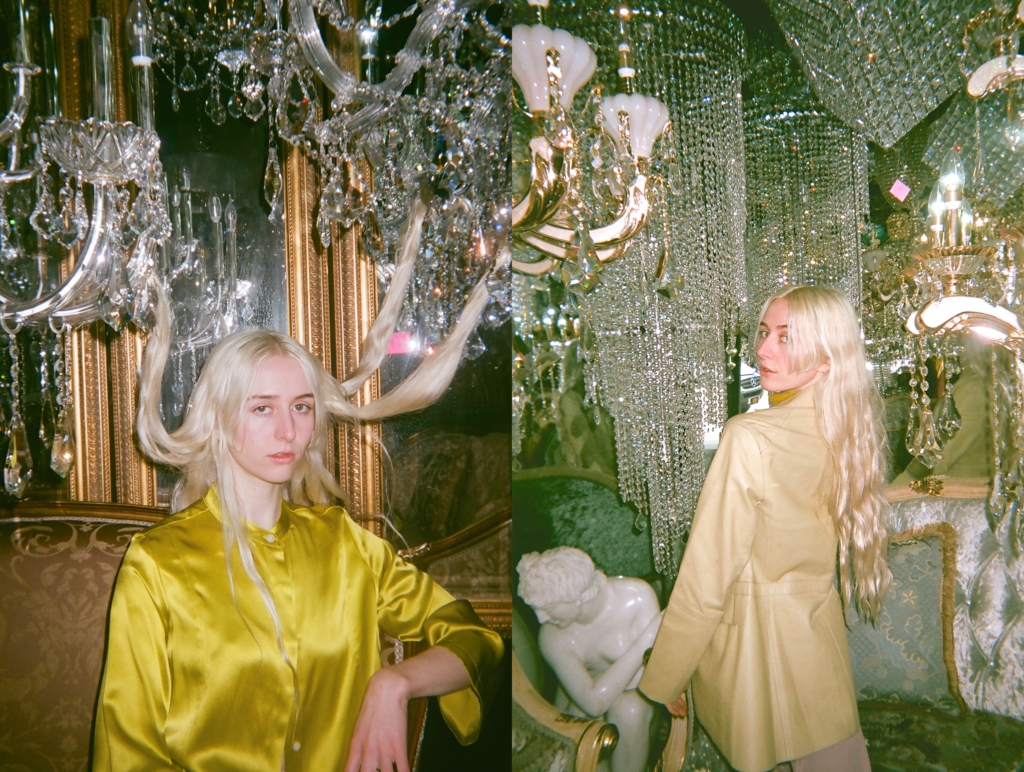 Does it take a certain amount of bravery to put out music that is so confessional?
I don’t consider my music to be confessional, even if it could be seen as a kind of document of my private inner world. Some of the things I sing about are inspired by things that have happened to me or that I feel, but a lot of it is channelling or releasing emotional landscapes I have absorbed from other sources. It’s an indistinguishable combination of it all. My lyrics aren’t meant to be approached as literal or narrative, but I find that people often project a narrative on them. And sometimes I wonder why that is. Narrative truth is a fraught concept in song writing or poetry. Sometimes describing things that didn’t literally happen is more evocative and ‘true’ than actual events.

I read that you spent a few years studying at a “culty” school — can you describe that?
I was privileged enough to attend a small liberal arts college called Bennington College, located in a really small ruralish town in Vermont that’s also called Bennington. Almost every-one who goes there lives on campus so it was quite insular. I guess I called it culty because of that insular feeling but it also has a well-documented hedonistic history. There’s a lot of mythology, customs and rituals that have been passed down. I think that’s true for most colleges but there was also a really specific energy there…

Earlier this year you released your debut EP, were you happy with the response?
Yeah, I think overall I was pretty happy! I think that I was most excited about the response that I got from my friends and peers. People knew me as ‘a musician’ but had never really heard my solo work before. It was gratifying to feel seen and understood, and like I was entering the conversation for the first time. It was also fun to get some recognition on music blogs too. That’s often a big piece of the puzzle of disseminating your music to a wider audience. I sort of anticipated that certain music blogs would cover my EP because I knew that they loved to write about Porches. That made me curious about what kind of autonomy I would be afforded as an artist completely separate from Porches, despite being affiliated as a band member. I don’t usually find that I am granted that autonomy, but I think that will change over time.

Would you correct anything? I mean, is there a time when someone wrote about you and got it wrong?
I would say that there’s at least three factually incorrect things in everything I’ve ever read about my project. A re-ally good example is the rumour that I contributed to Alex G’s last record, Rocket. When I put out my first single ‘Bad Behavior’ in November 2017, one of the first small music blogs that wrote about it said that I “make an appearance” on the record. It caught on like wildfire and literally everything that I’ve read about my project since has included this piece of fake news as a click bait headline or in the first three sentences of the article. I think the person who first wrote it must have thought that I was a collaborator because I helped sing the song ‘Alina’ at the Rocket release show with Emily Yacina, whose voice is on the record. I love that record so much and love Alex so much, so it’s a very flattering rumour! Usually after that, or in the same sentence, they also misconstrue my role in Porches [laughs].

I asked that because I’ve seen your music describe as “sweet” and “cotton candy” — yet in your press photo you’re crouched in front of a rock, wearing a suit and holding a blade!
Yeah I actually really appreciate you asking [laughs]. It’s cool to be given a formal opportunity to respond to it and also just reflect on it a bit more. This feels like the first chance I’ve been given. Music press is so crazy to me, especially if you don’t have a PR agent who is dedicated to managing your affairs. People can really promote whatever spin they want on your music unless you, or your PR agent, try really hard to give them the story already for them to work off. I think it’s difficult, if not nearly impossible, to not feel misunderstood when someone else writes about your music. They are attempting to put into words things that are abstract and aren’t really meant to be put into words. That seems very difficult to me so in a way I respect the people that feel so moved by the music that they choose to try and translate it into words. I try to approach everything I read about my work as just one person’s interpretation of the music. Maybe that seems obvious, but it’s about making a study of the writer or listener and sort of see-ing what it says about them instead of taking in their opinions as judgements of my work. I try to deduce what I can about who wrote the piece, and how that might effect their interpretation and approach. I think it’s a problem in music journalism that the writer’s opinions are sometimes presented as facts. And finally no, I don’t really agree that my music is “sweet” or “cotton candy,” but I do find it interesting and valuable that that was someone’s takeaway from listening to it. I guess that some parts of my songs have an uncannily saccharine feeling.