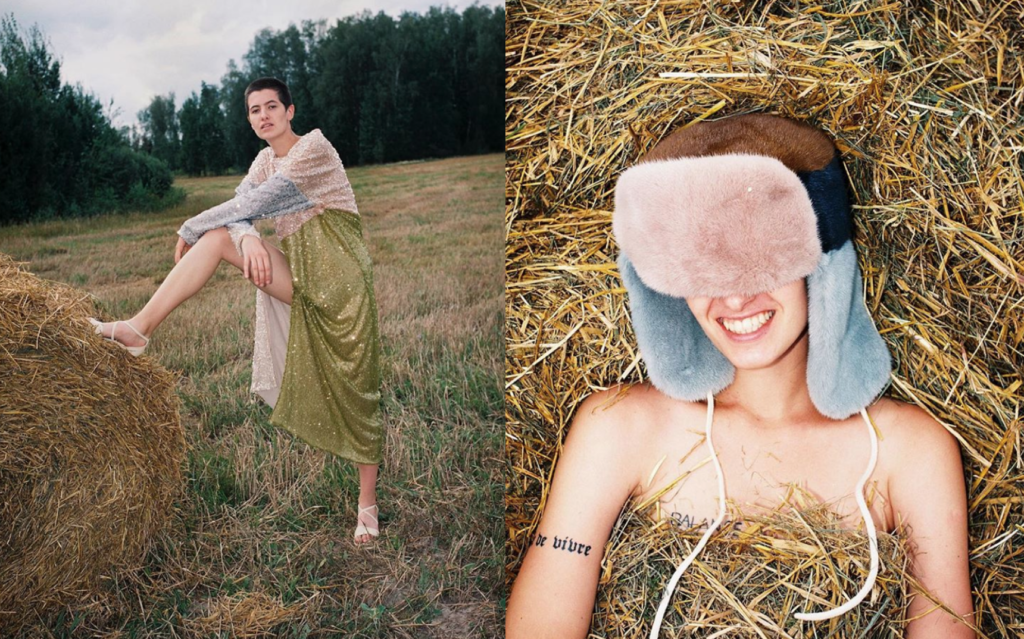 Andrey Artyomov launched his label, Walk of Shame, from Moscow in 2011. Like any good designer, he references pop culture in his work — films, television, music, dance floors. But his point of difference might just be that his television and dance floors were sat in Ufa, Russia, where he grew up and became quite fond of the sort of kitschness of Soviet television wardrobes. All that glittered and clashed, all that was considered bad taste, has become Andrey’s foundation of inspiration.

But aside from sequins and textures that may rub people the wrong way, Andrey focuses on clothing that works. Among gowns that sparkle and soft fabrics that ruche, are crisp trousers, well-executed cut outs, and outwear that is imaginative without being trend-based and throwaway. In his design foundations are also uniforms. And it’s this mix of costumes, regalia and working wear that manages to really individualise Walk of Shame — not only from those labels which, too, constantly have ‘post-Soviet’ pinned to them, but from a whole school of internet-era RTW labels.

Hey Andrey! I’ve read that Walk Of Shame is inspired by many things — rave, grunge hedonism, film, symbols of Western world luxury, post-Soviet Russia — but what’s specifically inspiring you right now?
I still get inspired by lots of things that are listed in the question as well. I guess, Soviet modernism and modernism in general, modernism in architecture are the most inspiring things for me. I love modernism because it includes really many things, it is very romantic, it will never be repeated – it’s rather expensive to repeat. It’s also called “The monument of unfulfilled hopes” very romantic. For now I am inspired by a huge number of artists: modern and contemporary. And of course by some of my artist friends. For example, Anya Titova, Vika Kosheleva – her watercolor shades are my favourite.

Tell me about the name Walk Of Shame, or can I ask when and why you last had a walk of shame?
Well I do the ‘Walk of Shame’ now a little less often than, for example, six years ago, but still with enviable regularity. The last one was probably my birthday, when I hardly left it, only with the help. My friends DJ’d, drank, sang and could not stop – and I was home at 7 am.

Before launching the label, you spent a lot of time looking at the fashion industry from a different perspective — working as an editor for L’Official, and launching Russia’s Tatler and even a Dazed and Confused, right? Do you think this armed you with a confidence to launch a label?
Yes, I think working in magazines has armed and helped and taught me a lot. Although I still have no confidence even now, even when the brand is represented in a large amount of stores and I have real interviews like this one. I have more confidence in making clothes, but all the same doubts otherwise – they are endless. But working in magazines certainly gave me a wide look at the industry. It probably became more difficult to deceive me, precisely because of my experience working in magazines. And of course, when I know a lot from this industry, when I draw a collection, I perfectly understand which items will be popular for fashion stories, which are more client-related, and which are for buyers.

Post-Soviet has been hot for a while lately in fashion — specifically streetwear — but your work is totally different. I mean, you have dresses doused in sequins. So you’re obviously not just referencing Russian kids in Reeboks and Adidas, so which parts of the Post-Soviet aesthetic are you pulling from?
As for inspiration, street style and children in Reebok, I think the sequins for me are also very Russian, also Soviet, they are exactly those references about those fairytales of luxurious life that I dreamt of living in the Soviet Union. All the things that I watched on the Bashkir TV when I grew up – everything was sparkling. For me, this kitch has always been very interesting – a look at textures, although it was always considered as a bad taste. But I did not think so. It seemed to me that this is such an interesting expression for people, that it is such a national ‘colour’, which I have always been interested in. It is the love of people for sparkly things and beauty where I was born and raised. I remember this mix when I went to disco, after all people dressed very brightly and defiantly. Of course, I always have this in my head, because these are my school years. Sequins are such a cliché representation of a beautiful fairytale life. I still have sequins, I mix them with some kind of grunge, with things from the 90s, plus it seems to me that in them there is such a Soviet graphic.

Do you think that these references are difficult for an international market to understand?
It seems to me that if an item is executed clearly and this reference is very beautifully implemented, interpreted, then it is easy to understand — even only from the visual part, without going too deeply. Perhaps for someone my references will give an impulse to study something, to learn new things about Russia, about the years in which I was growing up and about the others who now make art and fashion in this country. It seems that references are not difficult to understand, they are completely different visually, so it is easy.

Why do you think the world has become so captivated by the stories being told by young Russian creatives, especially designers?
It has always been like this and Russia had fascinating stories – starting with Diahgilev’s to Gosha. For many people, Russia remains a distant, strange, mystic and exotic country. Creative people from Russia are very interesting for foreigners because they are on the one hand mystical, on the other hand exotic, and this of course attracts attention. Plus, we have very rich culture. Over a hundred years, there have been a few changes in regimes, power, culture. The history changed very quickly, steadily and not steadily. I think it could be pretty punk to show such interest in Russia — since all of the old people in the West are scared of it… I don’t know. It’s important for me to work and be surrounded by a young and creative generation here in Russia. These kids DJ and walk down the catwalk at my shows, they are in my look books, or they simply wear my clothes – singers, ballet dancers. It’s important for me to be able to help them implement some of their ideas and give them a chance to earn some money, too. Despite whole political situation and circumstances, it’s fun and a pleasure to live in Moscow, and to create here. Being not Moscovite by birth, I understand better than anyone that Moscow is a thing itself – it’s not representing Russia, as much as New York doesn’t represent America. More than that, in Moscow me and my friends, we live in our own self-created circle. And living here gives lots of creative freedom and creative impulses.

Your collections always have such interesting textures — vinyl, patchworked fur, sequins, gathered seems — does a collection begin with fabric swatches? Or, where do you start?
The textures have really inspired me greatly since the days of the institute, and in general I really like textures. Yes, for me it all starts with the fabrics, because when I touch them, I feel them on a tactile level. It is often clear how this or that fabric will behave, they dictate the shape. Fabrics are cool substances and each behaves absolutely differently. It is very interesting to work with different textures, fabrics, which one never really put together before and that are generally incompatible. I am inspired by the looks – from women’s custom workers uniform to discos. I am very inspired by music and video clips, and this is the music that I remember from my childhood, or the music that my older friends listened to, starting with Niagara band and ending with the music that the first Russian MTV had, those Russian videos. I remember very clearly all the outfits from there. I recently re-watched the movie Fight Club, which made a huge impression on me when I was 18. I took all the male outfits of Brad Pitt’s character and transformed them into female looks. And now, for example, in the next FW collection there will be direct quotes from his outfits from this movie. But this movie was a shock for me, just as a concept, as a look at life.

I know you do both, but do you prefer designing menswear or womenswear?
I prefer women’s clothes. Men’s clothes are not clear to me yet, everything is new for me there. It’s new to me and I am taking small steps because I want to understand my place.

Is there any news we should know about? Upcoming stuff?
I hope that I will start to make bags and shoes – this is my dream. This is very interesting in terms of technology and workflow. Completely different than the creation of clothing.

Finally, since I read the word “rave” in lots of articles about you… what’s the perfect song to play just as the sun is coming up on Monday morning and the dancefloor is coming to a close?
Rave is probably a cliché, and a word that journalists glued to me more than I talked about it. Because my version of rave is not the rave that is popular today – wild and very fashionable. For me, these are nights at the nightclub on the river with pills in Ufa. The second turn of the nightlife for me was Solyanka club in Moscow, dawns with mushrooms, the terrace at our friend’s Payam at one of Stalin’s skyscrapers. The sun rises, and we are wrapped in a blanket, still under mushrooms and Payam puts on some Iranian music. This would be my track. But it’s also Dima Yaponets’ (aka Taras 3000) DJ set in Solyanka, when the security already draw up the curtains, the party is over and we move to the exit… and then Dima puts on your favourite track and you are back to the dancefloor for another hour.