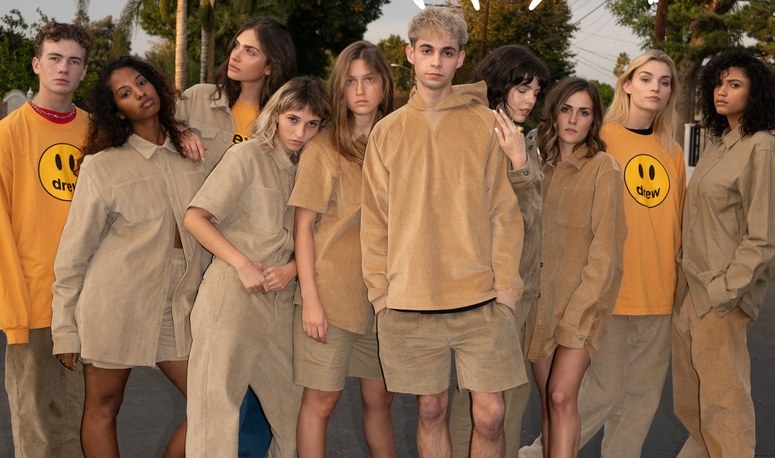 2019 is off to a good start for the new Mr. and Mrs. Justin Bieber. Earlier this week, Justin launched his new clothing line, Drew House (or is it House of Drew? IDK) , and it’s… very beige.

On its website, the label describes itself as: “drew house is a place where you can be yourself. blah blah blah blahsdbksjdfhl. wear like you don’t care. come chill. k. bye.” K, cool, and I guess ourselves are very… beige.

The brand includes athletic-style streetwear (that’s, yes, beige), as well as hoodies and t-shirts featuring the name DREW (Justin’s middle name) and brand logo, a giant smiley face. The pieces run from $50 (for a plain yellow “drew” tee) to $150 (for corduroy pants and a button-up). Each piece also comes with a super hip description on the site, such as “you could rock this bad boy for days. we dont recommend it, but you totally could” on a corduroy hoodie and “the kind of thing you wanna roll out of bed wearing” on said button-up. Both styles are also… beige.

ethically made in LA. see you again soon

Unsurprisingly, the whole line is already sold out — after all, this is Justin Bieber we’re talking about. BUT I didn’t realize so many people loved beige. Though clearly, Justin does.

No word yet on when the collection will be re-stocked, but a pop-up on the site says they’ll “hit us up soon.” In the meantime, the internet is having a field day about the line, specifically its prices ($98 for a basic hoodie) and diverse color palette. At least it’s “ethically made in limited quantities in Los Angeles.”

The new #drewhouse fashion line by Justin Bieber is proof that Kanye isn't the only popular musician who shouldn't be designing apparel. Better luck with a sneaker, Beibs.

I get paying more for ethically made clothes.. but this #drewhouse line looking like they just took a pic of UPS workers getting off their shift.