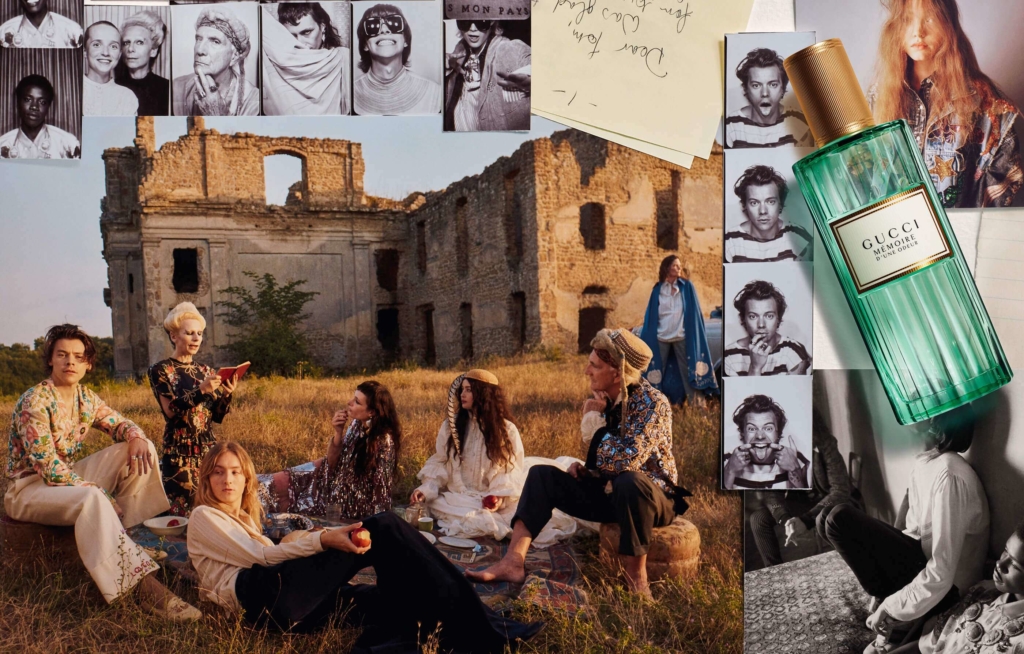 Gucci just can’t get enough of Harry Styles. First, the singer came through in a very Chuck Bass-style campaign, then played with a bunch of cute bb animals for the brand. Twice. Now, he’s given them access to an even cuter childhood photo as part of the launch of their latest fragrance and accompanying campaign starring, guess who? Harry Styles.

For the former One Direction frontman’s fourth collaboration with the label, this time for their new gender neutral fragrance Mémoire d’une Odeur, Gucci Beauty brought together an epic group of models and influencers, including Styles, Black Lips singer-turned-Gucci muse, Zumi Rosow, and Oyster favourites Ella Sophia aka @buildabrat (issue 116 beauty queen/cover star), and artist Ariana Papademetropoulos (who we featured in issue 113), to shoot a super cult-y campaign. But don’t worry, they were not inspired by the Manson murders.

At a family picnic in front of the ruins of village Canale Monterano with @harrystyles for Gucci Mémoire d’une Odeur—meaning the memory of a scent. The new universal fragrance by @alessandro_michele is inspired by the power of memories which can be relived in the present. The campaign is shot by @_glen_luchford with art direction by @christophersimmonds. #GucciBeauty #GucciMémoire #AlessandroMichele #HarryStyles @gucci Discover the new fragrance through link in bio.

To promote the campaign, Gucci shared adorable #TBTs from the models’ childhoods, including this now iconic photo of Harry Styles:

A snapshot when @harrystyles was a child. The British singer songwriter and actor is part of the campaign cast of new universal scent Gucci Mémoire d’une Odeur by @alessandro_michele, launching August 1st. Discover more about the fragrance #GucciMémoire through link in bio. #HarryStyles #GucciBeauty #AlessandroMichele @gucci

He looks exactly the same.

For the actual campaign, Alessandro Michele brought Styles, Rosow, Sophia, Papademetropoulos and the rest of the gang all the way to a castle in Rome, where they frolicked, danced and did other all around cult-y things like play flutes, wear animal masks and look effortlessly pretty. Then, they traveled to the ruins of the “ghost village” Canale Monterano, where they did more of the same, this time to the tune of Roxy Music’s “In Every Dream Home a Heartache” for the campaign video. Needless to say, it’s stunning… and I’d like to join.

A scent can gift a moment again, so an experience from the past can be relived in the now. Presenting the video campaign for Gucci Mémoire d’une Odeur, the universal fragrance by @alessandro_michele depicting a free-spirited family, who embrace life without inhibitions, making memories together. They are shown in diverse settings in the countryside of Rome, dancing, picnicking at Canale Monterano—a village with ruins from the mid 17th century, including a fountain with a lion statue said to be designed by Gian Lorenzo Bernini—and in and around their family home, the medieval Montecalvello Castle. Discover the fragrance through link in bio. #GucciBeauty #AlessandroMichele @gucci #GucciMémoire #HarryStyles Track Title: In Every Dream Home a Heartache Artist: Roxy Music Publishing Company: BMG Platinum Songs Recording Company: Universal Music Entertainment

As for the actual fragrance, Mémoire d’une Odeur, Styles says “it’s really fresh,” and “floral, clean, not heavy,” likening it to what he imagines Joan Didion’s house would smell like. Of course.

The brand’s first universal fragrance, “transcending gender and time,” Gucci Mémoire d’Une Odeur blends Roman Chamomile and Indian Coral Jasmine “to establish a new olfactive family” they call Mineral Aromatic. Like the campaign suggests, the fragrance explores the way scent is associated with memory, and how it can “[bring] back the past and [make] them live in the present.”

“A scent can gift a moment again, so an experience from the past can be relived in the now,” reads the product summary.

The fragrance is available in Australia from 1 September.  Sign us up.