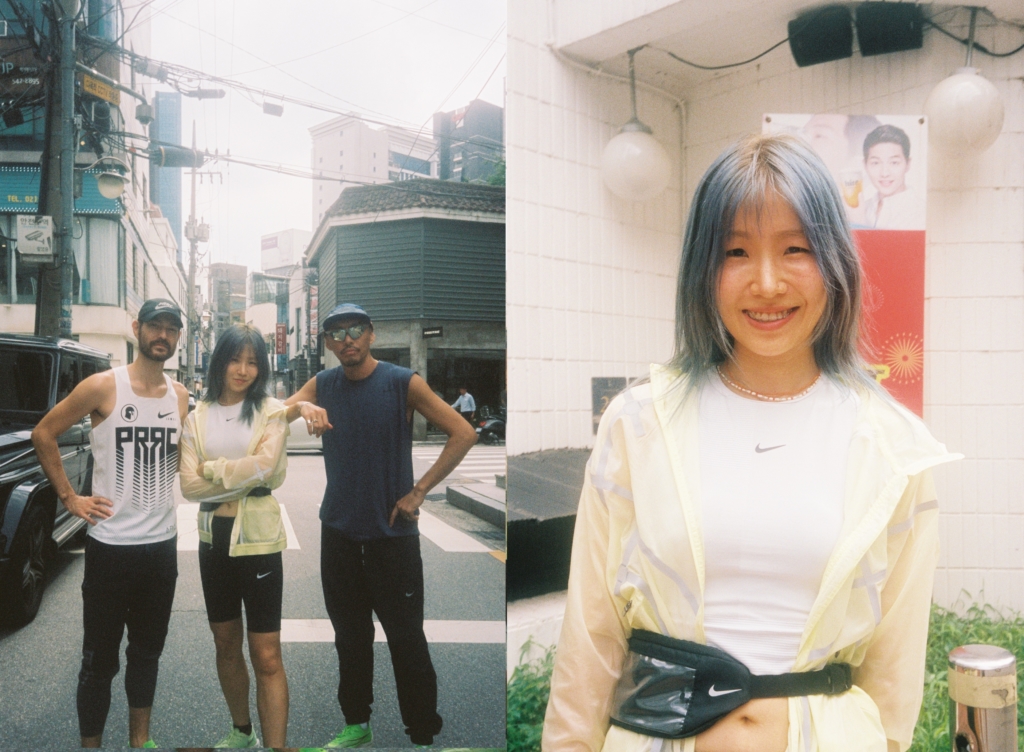 Remember when Nike sent us to Korea and asked us to run for four whole kilometres? We do too, our calf muscles are still aching. Luckily for us they also sent us to Seoul streetwear/rap legend Make-1‘s 8D Creative studio, and unofficial head quarters of Private Road Running Club, so we could meet three of the city’s fittest creatives.

Since they’re arguably the most influential run crew in Asia, and have been pounding the pavement together for the last five years, we hoped to get a decent chunk of inspiration to keep our own bodies moving. And they provided! Mental note: those tech green sneaks they’re wearing are the Zoom Pegasus Turbo 2 — made for serious runners. Not to be confused with the Joyride we’ve been banging on about for months.

PRRC co-founder and model James Lee McQuown invited us hang with the crew for an afternoon, introducing us to their other co-founder, the aforementioned Make-1, as well as core member Jang-Mi (who does an incred streetwear brand called More Than Dope). We asked questions, and James patiently translated everything for us — then took us to get our asses kicked by some spicy Korean food. Thank you James! 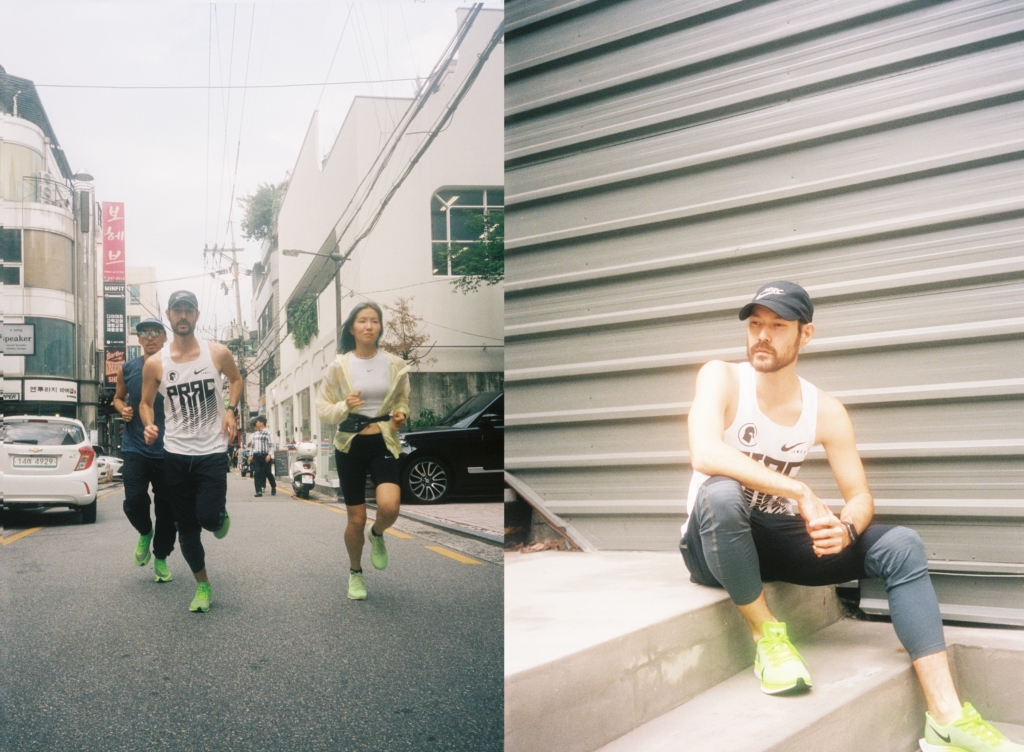 Hey, I want to introduce you guys not just as runners — so who are you socially and creatively? And how do you know each other?
James Lee McQuown: We come from an artist collective called 360 Sounds, that’s how we met each other. We were a crew before we became a run crew, PRRC came out of that. Make-1 started out in the music industry, he was part of a rap duo and that’s where his name comes from. I met him because my wife is a photographer and she actually shot all of the album covers of most of the underground hip hop scene. Now, he has been pushing a streetwear brand and he has made that his day job — he has always had his ear to the street and knows about what’s going on in the street culture here. He’s famous for that and has a huge following on instagram.
Jang-Mi: I work as a designer, for my own brand, which launched four years ago. Me and my co-founder made our brand, it’s a unisex streetwear label called More Than Dope.
JLM: It’s pretty in your face — 90s throwback is hot right now, and she’s on the fore front of that. But Jang-Mi and I actually go back before that, because when she was a fashion student, I was a working model and walking shows. I don’t recall the show itself, but she was working the show with me.
JM: Yeah I was backstage, dressing.

Were you all already runners before you met?
JM: Yeah, before joining PRRC I had been running for a year.
JLM: They make you run in school — I went to international school at the military base — so you either get with the program or lag behind. If you had any kind of intelligence you would just get it over with. Make-1 went to military service, because you have mandatory military service in Korea if you’re a man. I’m lucky that I have US citizenship so I didn’t have to go, but he went hard, he jumped rope and he got fit, he took that time for self improvement. A lot of people get traumatised by it but he took a healthy approach and I think that influenced us when we built PRRC — that healthy mentality. We come from this DJ crew background, where you party and you tend to do a lot of drinking. So, when we made PRRC, there were five of us all together and the idea was to meet in the middle of the week and just run and split up as soon as we’re done. Otherwise it snowballs back into getting something to eat, have a drink, and same thing over again. We wanted to try to do something more healthy.

So that’s what it offers you — aside from the being mates it’s primarily about self-care and health?
JLM: It turned into something completely different, but when we first started it was just a group of friends — we were already from a crew, and we already had our established network, so it was a tight knit group of friends and that’s why we called it Private Road Running Club. It was a private get together and you had to know someone to get in. But Make-1 and our other founder JBW had a vision and they wanted it to grow, because they thought why should we keep this to ourselves? And we don’t regret it.

I did wonder where the name came from…
JLM: By opening the group up, the name became a metaphor — there’s a private road that we must all go on, but if you go together you can share the burden. We have a saying in Korean: ‘내가 가면 길이 된다’ Literally translated, it’s ‘If I go, there’s a way.’ But, it’s loosely translated into ‘If there’s a will, there’s a way.’ 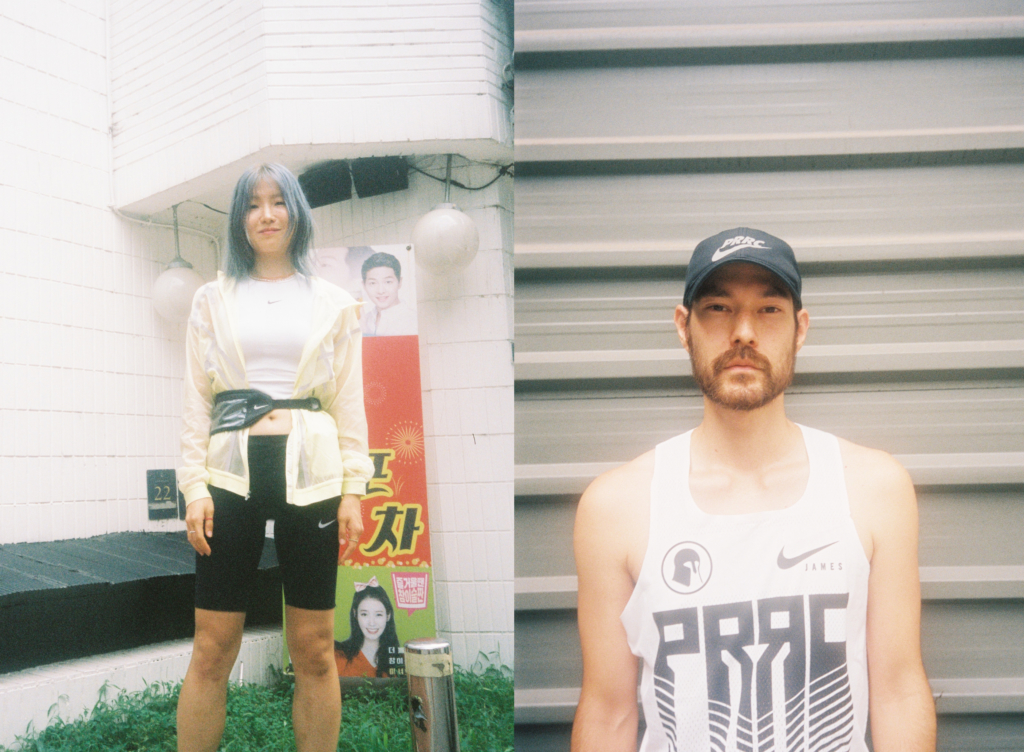 Is there an initiation process now? How does someone join?
JLM: Now, it’s pretty open. We’ve done PRRC open runs several times to intentionally invite newcomers. It’s really word of mouth now — if you know someone who runs, you’re just welcome to come. There has to be a standard, though. You have to be able to run at a certain pace, otherwise you burden the rest of the group.

It’s interesting how much you talk about crews and collectives. Last time I was in Seoul, I met with Mischief, and they were also speaking so much about crews. Is everyone part of something here? Is it a Seoul thing to be in a collective, do you think?
JLM: Mischief are our friends, too! They’re part of the same group as us, doing the 360 parties with us and being part of this underground culture. But, I think that Korean culture in general is a very collective society. We do everything together. Even in the terminology in the language, we say ‘Our country,’ out of respect. Or even ‘Our son.’ It’s sort of this group-think mentality.

What’s the most important reason for you to all keep on running? Is it the togetherness now or is it still because it’s a healthy thing?
JLM: For me, it’s all of those things. It’s a way for me to clear my thoughts and deal with whatever personal issues I have. I used it at therapy. It also brings structure to my day, because I’m freelance. Make-1 says that there’s an addictive aspect to the running. The community aspect of it keep you together, but once you get a taste of the competition, after you’ve been to a couple of races, you get this energy high. So us having this community and making plans to run together, and train together, feeds into the continuations of it. Jang-Mi says it’s a dream of hers to be able to run like this until she’s old, so she’s a grandma out there running and actually sticking with it.

Why?
JLM: I don’t know about the female aspect of it, but there’s a lot of grandpas out there that run. The history of running in Korea is mostly focused on these older guys in their 50s and 60s. So this fresh cool run crew thing is very new in Korea, but as you can see there’s already so many. 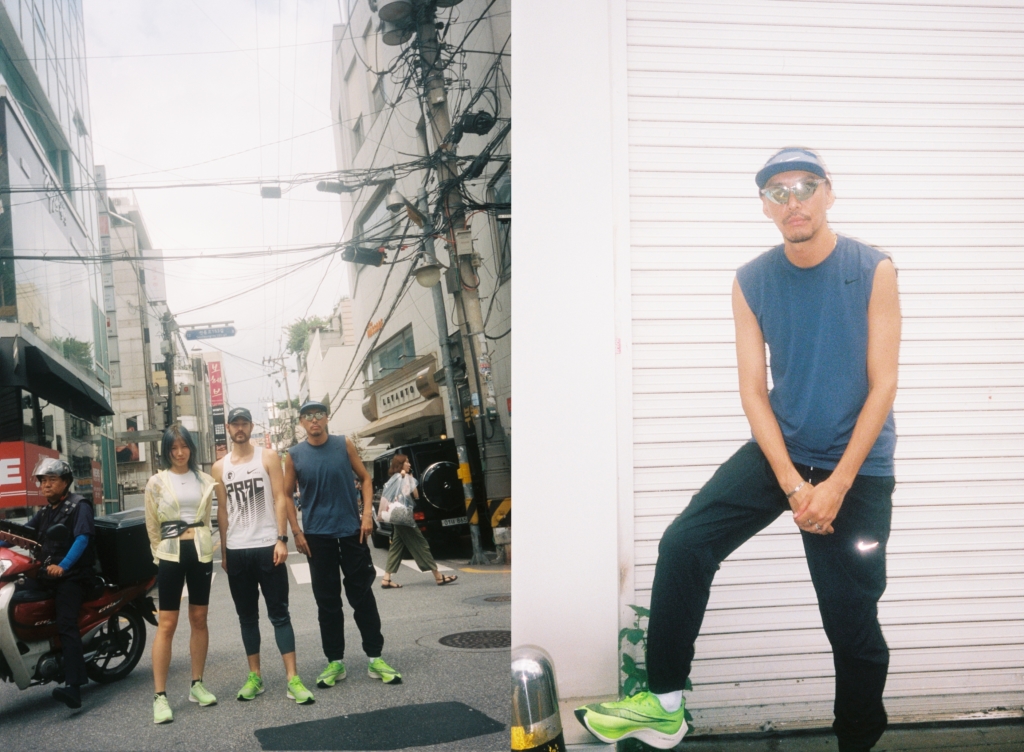 Since you’re all creative, and especially the three of you exisiting within fashion worlds, are you conscious with the way you present yourself on runs? Does style and gear hype play into it, or are you totally liberated from it?
JLM: I don’t care too much, because I want to focus on the run [laughs]. But, Make-1 and Jang-Mi are definitely trend-setters. A lot of people are really seeing what they’re wearing every day. Make-1 says that at first he wanted to wear all of the freshest gear, but the more serious we all got about running, what you’re looking for is a better fit and more performance-based products — elite gear.

So you’re looking for innovation, rather than how good the colours look…
JLM: Jang-Mi says that regardless of how good the gear might be, no one’s going to wear it if it’s ugly. And Make-1 has commented on the fashion designers doing crossovers with Nike, Like Off-White’s track and field collection, and he says that we can really benefit from these collaborations because of the technical aspects and industry secrets pass between designers — we see them trickle down into our regular sports gear later on.

How would you encourage people to start running? Any advice for people like me who’re a bit nervous about not being very good at it?
JLM: There are so many different types of runners, we all have different focuses. But, I think, throw the marathon idea out the window because you need to start slow. The best way to do that is to get with a crew and have a support system. It doesn’t need to be an established crew, just a group of friends, so you can hold each other accountable. It’s also good to have a goal — wether it’s about weight or distance or whatever. Say you want to run 10km, if you’ve never run before you need a number of months to prepare for that — give it a year.

Do you have any golden rules for a successful run?
JLM: Preparation. It’s all in the preparation.

Finally — and I’m looking for an anecdote here — when you run late at night, because you cover so much distance, I wonder if you’ve seen anything super strange in the city.
JLM: I’ve seen a lot of weird stuff, I see tonnes of fisherman that I had no idea about, but I wonder about Jang-Mi and Make-1. [Laughs] Ok, Jang-Mi says she saw a crab once! [All laughing]. 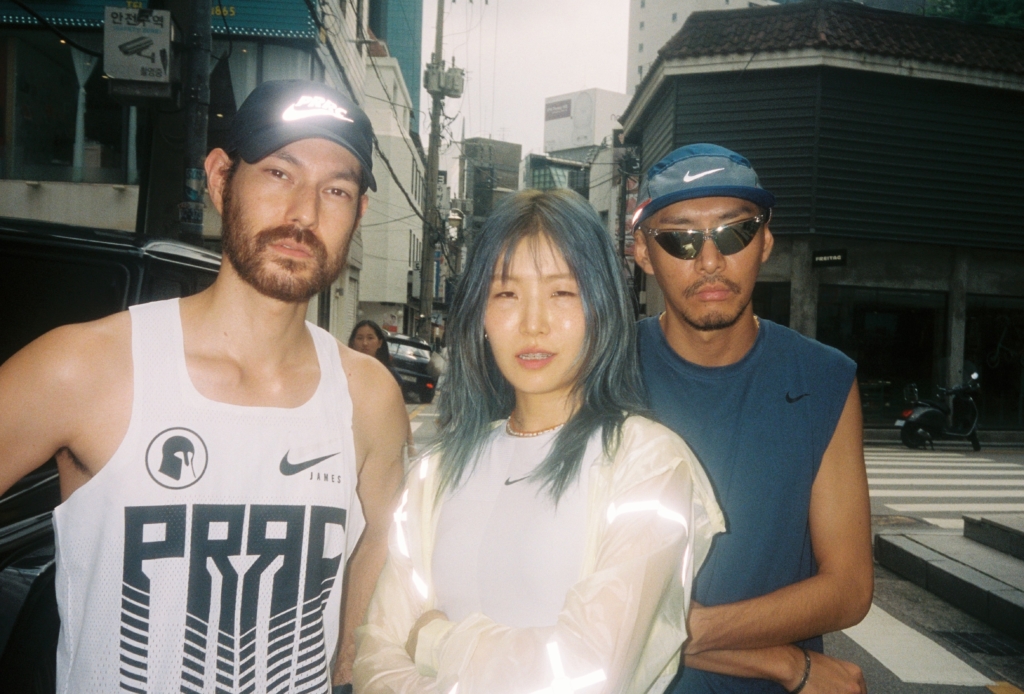