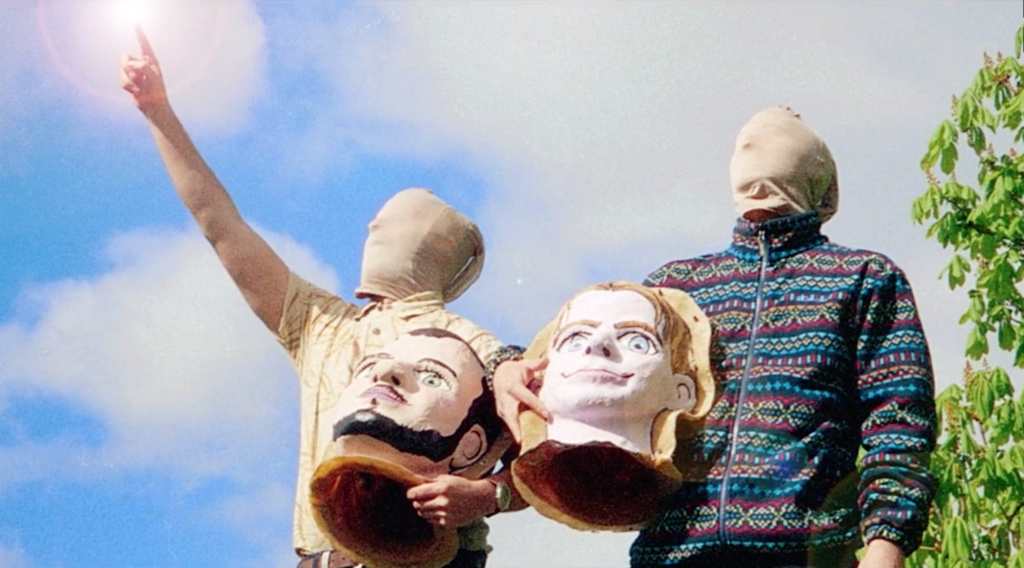 Blu Cheese is Nathan Ceddia and Troy Hewson, two guys who love kitsch concept-driven DIY music and filmmaking so much that they decided to birth a project out of it. The story goes that they met while working on a lil film called The Huntsman, got fed up with big biz money burning, and then decided to push all of their creative impulses into Blu cheese — a synth pop passion project that pongs of good times and polite mayhem.

Their debut single ‘Paradise’ debuted a week or so ago, and it comes from a full album, titled New Mold, which is due for release early 2020. With the single, comes a quirky lil visual (directed and edited by Nathan) that draws straight from Depeche Mode’s ‘Enjoy The Silence’ clip — a journey toward paradise via magical nonsense is documented, only this time the protagonists have been fitted with found fibreglass heads that look just like their own. Intrigued, obvs, we asked the guys a couple of questions.

Where did you grow up and where do you live now?
Nathan: I grew up in the sunny suburbs of Melbourne Australia, I currently reside in Berlin Germany.
Troy: I grew in Worcestershire and now live in Hackney, East London.

What were you interested in as a kid?
N: Staring aimlessly at the flicking TV screen, eating bugs and trying to dig to China in the sandpit.
T: I was really obsessed with a program called Rosie and Jim and then I slowly made the shift to WWF wrestling.

Which parts of your upbringing do you think might have been the gateways leading you to music and creative work?
N: Dancing around the lounge room to my older brother’s cassettes, playing in my backyard and watching movies on my Grandpas VHS player.
T: My family is massively into Bon Jovi and I ended up getting invited on stage with them at Cardiff Millenium arena in 2001. After that, I obviously wanted to learn how to play guitar.

You’re both creative people — is there a trick to keeping creative ‘work’ and creative ‘passion projects’ separate? Do you think you need to?
T: They benefit each other massively. I learn a lot from the challenges and parameters creative work has and so when it comes to working on passion projects I feel way more inspired.

Actually — maybe you can introduce your work to our readers. Outside of Blu Cheese, what do you both do?
N: I’m a film director, working with all different genres, turning the ordinary into the extraordinary.
T: I work as a composer and music producer for Warner Brothers. I also do installation work.

Which subjects do you gravitate toward the most? Why?
N: I love nostalgia, I think anything that makes you feel young or reminisce is worth exploring.

What does creating art or music do for you? What sorts of life stuff has it helped you conquer?
N: Creating art gives me a new type of existence, one that allows me to exploit and explore the boundaries of everyday life. Without art, life would be pretty boring.
T: I feel like I need a creative output to be happy. That said, I would love to branch out into more art forms other than just music, even on just a very casual level.

How do you hope people feel when they hear your new track ‘Paradise’?
N: Accompanied by the music video, I hope it takes them on a new and exciting journey.
T: Joy peppered with confusion.

Can you tell me specifically about the song? What was it like working together? And what new and old ideas do you explore?
N: It was very collaborative during the writing process. Once Troy had made the music and then recorded his first verse, I came over to his flat, listened to the song a few times, then wrote my verses and the choruses on the spot.
T: I wanted to make an uptempo album opening track. I was massively into New Order and the really indulgent instrumentals that they did on ‘Temptation’ and ‘Blue Monday’.

The video clip is amazing — can you tell me a bit about the making process and how you built the narrative?
N: I wanted to shoot the whole music video on film but I couldn’t afford it. So I bought a whole bunch of Agfa 200 film from Poundland. Using a stereoscopic 3D 35mm camera from the 80s, I was able to create the film effect for a fraction of the cost.
T: We were really influenced by Depeche mode’s video for ‘Enjoy the Silence’ and we wanted the process to be a journey of discovery.

What’s the best work you’ve ever made?
N: I recently completed my first film shot on 16mm. For me, it’s the most visually pleasing and honest film I’ve ever created.
T: I made a track a few years ago called ‘Evelyn’, where I just used found sounds that I captured in the house I was living in at the time — it was just a really fun, impulse-based shift away from what I normally did at that point.

What’s the best work someone else has ever made?
N: When black and white turned to colour in The Wizard of Oz, and then the sequel which is out of this world strange.
T: I really love Alex Ebert’s score for the film All Is Lost. There is little to no dialogue with just one character, so the music really drives the narrative.

In relation to your career, what scares you most?
N: The next big move/idea.
T: Being able to find the time to do work that gives me the most joy, and balance this with making money.

The best piece of advice you ever received?
N: “Nothing is ever wasted, Nathan… you just have to hold your head high, enjoy the ride and trust the journey.” — my Mum.
T: “You are an adult and you know what you want or don’t want… stick up for yourself and work to your strengths.” — Jennifer Hewson.

And the best piece of advice you’ve ever given?
N: No shit no wonder.
T: Be yourself and stay authentic.