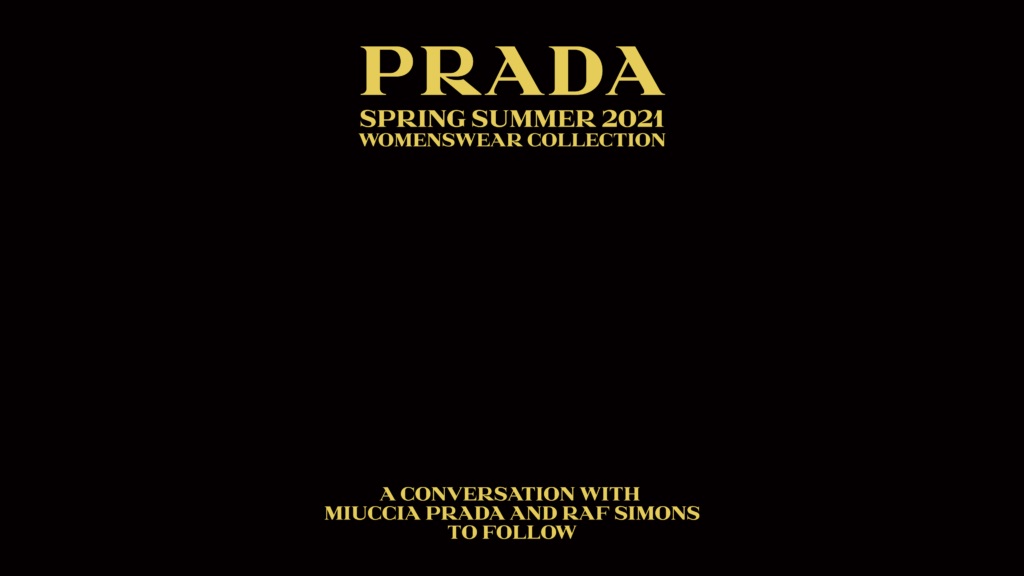 Back in February (AKA, a lifetime ago) we all got very, very excited by the news that one of our fave Belgian fashion geniuses, Raf Simons, would be joining forces with beloved Italian icon, Miuccia Prada, by taking on the role of Co-Creative Director with her at Prada.

It’s a somewhat unconventional way of working that sees Raf “sharing equal responsibilities for creative decision-making” with Miuccia. Of just how they would make the collab work in practice, it was explained during the announcement’s press event that: “When we both believe in it, we’re going to do it. When one doesn’t believe in it, we’re not going to do it,” noting the strength that comes from two creative forces being in alignment.

Though we were all yet to really realise what the coming months would bring, and the changes it would necessitate, he also said at the time that they were already very much engaged in discussing the role of creativity within the fashion industry, and how it important it was to them to “re-look at how creativity can evolve in today’s fashion system.”

So, finally, here we are: excited with anticipation to see their debut collection as Co-Creative Directors, with the Prada Spring-Summer 2021 Womenswear digital show today, which you can watch here on Oyster via the live stream below at 10 pm (AEST) tonight:

With COVID continuing to speed up the digital democratisation of the once exclusively insiders-only Fashion Week show — as with the brand’s very well-received digital presentation for their Menswear SS21 Collection in June — there is again no exclusive front row, or need to travel to Milan. And not only are we all invited to enjoy the show from wherever we happen to be today, but we can also all be editors, too, with a conversation between Miuccia and Raf proceeding the show, for which the brand has crowdsourced interview questions from their followers.

Ask #MiucciaPrada and #RafSimons about their first show together. The #PradaSS21 womenswear presentation on September 24, at 2pm CEST will be followed by a conversation with the co-creatives, in which they respond to previously submitted audience questions. Ask away via link in bio.

Tonight’s plans? Dressing up in Prada sweats and enjoying fashion week with a seltzer on the couch. See you there.