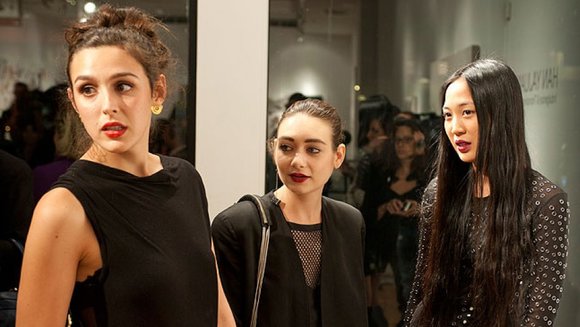 Every now and then something magic happens on television. When I think about how old people must have felt when they watched man land on the moon, I think about my own emotions when I watched End Of Century host their first exhibition opening on Bravo’s literal gift of a reality show, Gallery Girls.
The show follows approximately seven women from conflicting parts of New York, while they navigate trying to make it in the art world. It was so terribly good that I am still following the entire cast on instagram except Chantal, who I refuse to give follower count to but defs still hate-stalk. For some reason, the show never saw a second season. Given such a dynamic cast, I honestly can’t work out why.
There’s Liz, who is the daughter of a big art collector Marty Margulies and who has overcome drug addiction to become an intern. She does not enjoy the End Of Century girls (more on them later).

Amy is probably the best one. She’s like a labrador who just wants to be loved. You get the feeling no one likes her that much — probably because she’s the smartest and has had actual real jobs in the industry. She’s great.

Maggie… poor Maggie. Her boyfriend is a full tosser and her boss Eli Klein is even worse. Eli makes her do degrading stuff at her gallery job like clean the dog bowl. It’s awful to watch. I can’t even make jokes here.

Chantal is one of three co-founders of End Of Century. Chantal is an asshole who has since moved to LA to start a magazine called Ana — it has weird pronunciation because of course it does. There are no gifs of her business partner Claudia saying anything funny because she’s mostly bummed out the whole series, and I’m still not even sure that the third partner Lara was even real. Chantal, on the other hand…

Then there’s Angela, a social photographer and wearer of the exact outfits we wish we owned when we wanted to be featured on Cobra Snake. She’s the ~tells it like it is~ one.

Finally, Kerri Lisa, a gallery ‘girl’ who was definitely much more of a woman. She was a middle class Long Island lady who dreamed of moving to Manhattan to start a lifestyle brand. Therefore, there are no gifs. But I think she’s a DJ now?!

If you have never had the distinct pleasure of getting to know these fab chicks, please deal with that by watching the below immediately. If you do know them, what the hell, re-watching the season for the 7th time wont hurt 😉