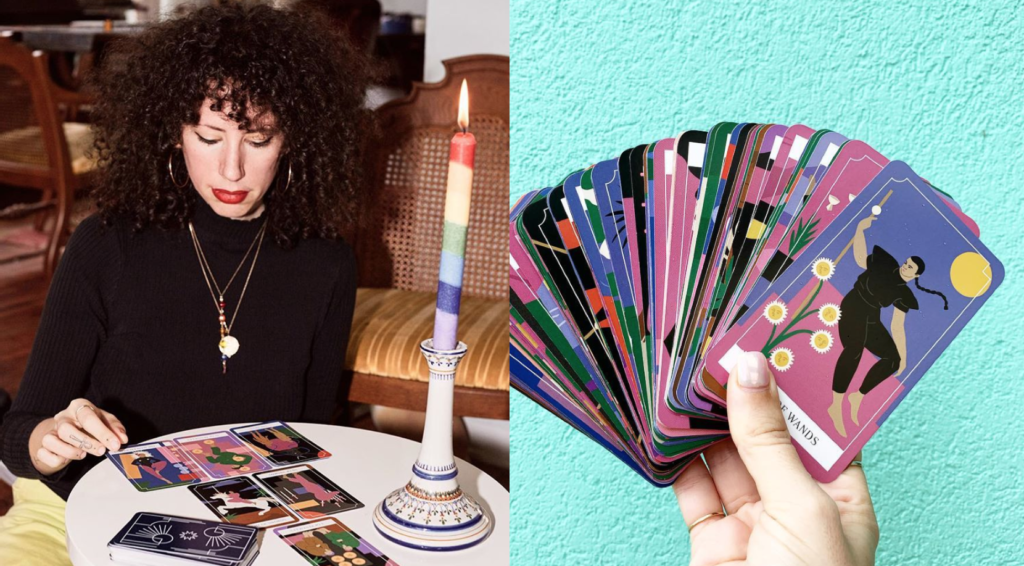 Jerico Mandybur, exceptional woman, helper of healing and self-described “queer, half-Egyptian weirdo from Australia,” has recently done another brilliant thing. That thing is a beautiful entry into the world of tarot, via an instructional (and confessional) book and perfectly designed deck that appeals to the very core of our ~aesthetics~.  It’s titled Neo Tarot, and we are so lucky enough to bring you an excerpt from within (the book, but also herself), where Jerico introduces the practice of readings as self-inquiry, empowerment and, most importantly, as something that should be accessible.

It’s HERE 🔮🌈⭐️ I had a book baby and it doesn’t feel real but also it does because like anything worth having, it was work. If you bought Neo Tarot (or are planning to) or encouraged me in any way in the last year, thank you so much for your faith in me. Deepest gratitude to @dai.ruiz for creating the most incredible, powerful images that both honour the past and the future—and Kajal and @hardiegrantbooks for the platform. I’m tempted to say I never would have imagined I’d write a book. But despite all the shit I’ve lived through, I always ~dreamed.

What do self-care and tarot have in common? Kind of everything. They both require ritual, positive affirmation, and the suspension of disbelief – to one degree or another. They both know the importance of ‘mind, body and spirit’. They’re both about learning how to live better and take care of ourselves smarter, every day.

I was raised by a hardworking Egyptian single mother. On my dad’s side, his Ukrainian grandmother was called a witch. My upbringing was heavily influenced by spiritual traditions: superstitions, saints, messages sent through dreams, and evil eyes. So, the notion of magic was familiar to me, from a very young age. Whether you ‘believe in it’ or not, viewing tarot as a prompt for self-inquiry – a mirror into the subconscious and a tool for self-care – is a productive, accessible way to approach healing and empowerment. And these days, we need those more than ever.

Practices that fall under witchcraft, such as tarot and astrology, have, I believe, been demonised because they’re a feminised knowledge system that threatens the rationalist, materialist power structure. Midwifery; being a single woman; healing using old plant knowledge; having any kind of marginal identity – these are all things that women have suffered for, but they are now being reclaimed thanks to a new, more open-minded generation who are working out their identities and doing their best to look after themselves in an often crappy world. It’s no wonder tarot’s been re-energised, then. Tarot is available to everyone, it doesn’t discriminate, and you don’t even have to ‘believe in it’ in a traditional divination sense in order to benefit from it. It’s kind of like self-directed therapy – a chance to slow down, a container in which to go deep, and a safe space in which to show up for yourself. And for each other.

As for self-care, its growing popularity is both a cause for celebration and maybe slight trepidation, too. Trepidation, because of the growing threat of co-optation; celebration, because so many human beings struggle and their survival through self-care shows their resistance. Thanks to the work of women of colour in particular – across mental health and social work, grassroots activism and civil rights, as well as broader cultural conversations regarding the importance of ‘fixing your own oxygen mask before attending to others’ – it’s now hard to see self-care as anything but a necessary act.

Neo Tarot is spiritual defiance as much as it is a refreshing approach to healing. Tarot is the blueprint, but you are the architect of your own life. The new wave of tarot literacy and practice is an increasingly valid way for like-minded people to look after themselves well, and the people around them even better. A whole generation of people committed to healing themselves and healing the world? That really is magic.

This is an edited extract from Neo Tarot by Jerico Mandybur published by Hardie Grant Books RRP $39.99 and is available in stores nationally from May 1, 2019.