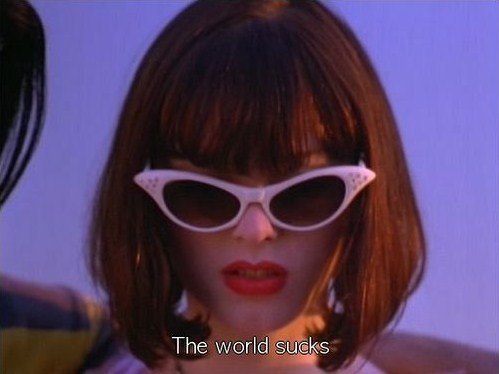 Charmed, Sabrina, Heathers, Roseanne, Clueless — if 2018 was the year of anything, it was reboots. And because we can’t ever just leave good enough alone, we know 2019 will be filled with just as many. After all, MTV is already planning on bringing back Daria. But this time, we’re being proactive. Below, peep all the movies we’re hoping will be turned into cheesy TV reboots in 2019.

Talk about a classic! And The Craft is especially overdue for a reboot, since there’s been talks about a sequel since 1998. Literally. Plus, we know the whole witch thing is in right now — Charmed and The Chilling Adventures of Sabrina prove it.

The original teen dramedy, Empire Records, would make for a perfect TV reboot. Set in an indie Delaware record shop, we’d watch the goings on of a group of teens as they figure out the world… and fight to save vinyl in a world where literally no one owns a record player, except ironically.

Enid and Rebecca are perfect for 2019. In the show, we’d watch as Enid lives her new life in a new city after running away, while Rebecca is still working at a coffee shop. Seymour dies in a freak accident, which brings the two friends back together, but no matter how hard they try, nothing can be the same between them.

Mary-Kate and Ashley Anything

Billboard Dad, To Grandmother’s House We Go, Passport to Paris, Double Double Toil in Trouble — I’d be happy with literally any Mary-Kate and Ashley reboot. Even New York Minute… if only just for the style tips.

Since we know witchcraft is big in 2019, I’m sure anything supernatural would be. This Beetlejuice reboot would be live-action (not a cartoon) and follow Lydia’s life after the movie ends, living with Barbara and Adam. Of course, Beetlejuice would constantly be trying to find new ways to make it back to Earth to disturb the Deetzes, kill the Maitlands and marry Lydia.

Tank. Girl. My favourite 90s movie would be an excellent post-apocalyptic part comedy, part action show. And the writers would never run out of material — Jamie Hewlett and Alan Martin who have been releasing the Tank Girl comics since 1988, dropped their most recent issue over the summer.

Though Buffy The Vampire Slayer is already technically a reboot of the 1992 film of the same name, we vote for an all new Buffy series. Of course, we’ve heard that a “richly diverse” reboot is already in the works, but we’re praying it actually happens. Of the project, the producers said: “Like our world, it will be richly diverse, and like the original, some aspects of the series could be seen as metaphors for issues facing us all today.” And thankfully, Joss Whedon is already on board. While we wait for Buffy 2.0, though, we’ll just be busy re-watching the musical episode.

Mean Girls is already on Broadway… why not television? There have been rumours of a reboot for years, but we vote for a different kind of spinoff: The Janis Ian Show.

No, but really, not all reboots are bad! Or, at least, they shouldn’t be. Another Sara Michelle Gellar classic. And because nobody remembers Cruel Intentions 2 and 3 (thankfully), it’s about time we bring back Annette, Sebastian and Kathryn… though, I’m not sure how well the whole plot would fair in the 2019 environment. Maybe, instead of virgin-shaming Annette, Kathryn could be a sex positive feminist role model, and their dynamic, as well as Selma Blair’s character could all be a commentary on how hard it is to be a woman, and the Madonna/Whore complex society has placed on us. I’m probably thinking too much into it…

Speaking of 2018 (and probably 2019), Gregg Araki’s 1995 film The Doom Generation has never felt more relevant. The dark comedy is apocalyptic and brilliant and we’d kill to see it on TV. Rowan Blanchard with a bob as Amy Blue? Yes, please. Ever feel like reality is more twisted than dreams?

Oh, well. I’ll be watching the Charmed reboot until next year.